2021 emerged as the best performing year for Indian equity markets in four years. Despite witnessing massive FII outflows towards the end of the year, the BSE Sensex rallied 22% while the Nifty 50 jumped 24%.

But the momentum broke in 2022. Inflation, global interest rate hikes, and the Russia-Ukraine war  spooked investors and sent markets tumbling.

Traders and investors alike have found it challenging to navigate the market amid the ongoing volatility and truth be told such volatility is expected to continue in the near term.

The gains made in a month are erased in a single day! Take yesterday’s example…the Nifty was just starting to bounce back and then came a massive 400-point fall.

Although, amid the market correction, some stocks have managed to deliver multibagger returns.

While the benchmark indices are down over 10% this year, these stocks have nearly doubled.

Here are some of the best-performing stocks of 2022…

Owing to rising crude oil prices, refinery stock Chennai Petroleum Corporation (CPCL) is on the top of our list.

The stock has given multibagger returns of over 230% in 2022 so far and has rallied over 25% in the past month alone.

CPCL, a subsidiary of the state-run Indian Oil Corporation, operates in the downstream petroleum sector to produce an array of value-added petroleum products.

The rise in the Singapore gross refining margin (GRM) to a record high of $25.2 a barrel boded well for Indian refiners causing the recent surge in the stock.

GRM is a common measure of refinery margin. It is the amount that refiners earn from turning each barrel of crude oil into fuel products.

Adding to the rally, the company posted strong Q4 results recording a four-fold jump in its bottom line on the back of firm sales growth.

What’s more, ace investor Dolly Khanna bought 1 m shares of CPCL on 28 April via an open market transaction adding fuel to the fire. And we know what happens when the market gurus load up on a stock. 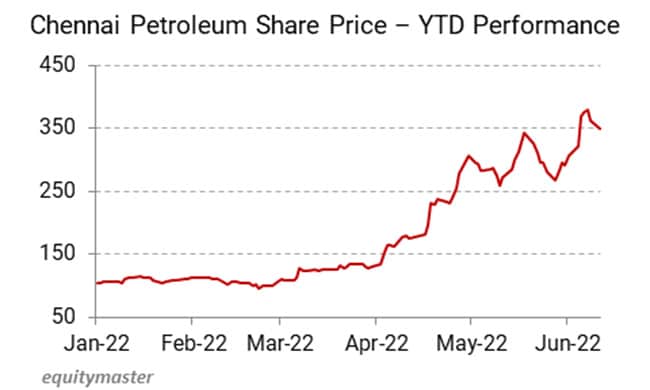 No surprises here. While all Adani group stocks have rallied this year, Adani Power has stood out more than doubling investors’ wealth.

There are several factors that have driven the stock throughout the year.

The electricity demand has shown strong growth in India, driven both by economic growth and heatwaves in the north-western parts of the country.

The company posted strong topline and bottomline growth for the March 2022 quarter on the back of such strong power demand and was aided by the long-standing dues received from three Rajasthan discoms.

The rally in the stock was further boosted as MSCI (Morgan Stanley Capital International) included Adani Power in its global index.

During the year, Adani Power also announced an amalgamation scheme for the merger of its six wholly owned subsidiaries with itself. The company also acquired Essar Power MP.

Most commodities including crude oil and metals hit multi-year highs this year as a result of the Russia-Ukraine war.

This has created havoc in most asset classes, but some companies have greatly benefited on expectations of strong earnings.

One such beneficiary is Gujarat Mineral Development Corporation (GMDC). It is one of the leading mining players in India with five operational lignite mines located in Kutch and Bhavnagar regions.

In GMDC’s 2021 annual report, the company said that in the coming years, coal production in the country is likely to receive a boost as the government plans to replace country’s captive mining policy in coal and iron ore with an open bidding one.

As five mining leases are reserved for GMDC, the boost will lead to increased production translating into strong topline growth.

The company has backed its words delivering solid Q3 and Q4 results in the 2022 fiscal.

The company has also approached various cement companies across the country for setting up of cement plant where it will be a long term limestone supplier. 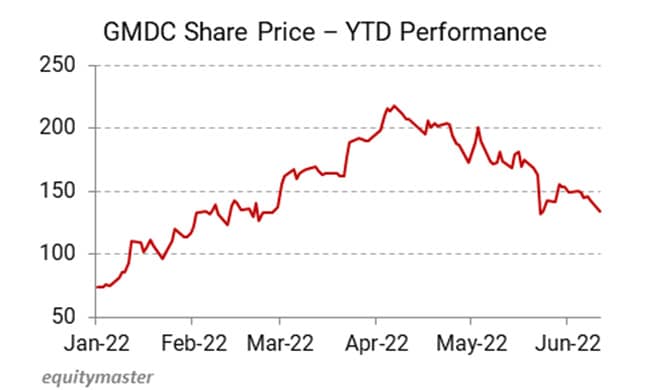 The defence sector has stood out to be one of biggest gainers this year post the Russia-Ukraine crisis.

Several countries, including India, have increased their budget spending on defence resulting in an influx of increased orders for defence manufacturing companies.

In February 2022, the company signed a contract worth Rs 31.3 billion with the Indian Army to manufacture and supply Konkurs – M AntiTank Guided Missiles in three years.

The share price further got a boost in April after UAE firm Tawazun Economic Council exchanged memorandum of understanding to explore new business opportunities in various areas of mutual interest.

Under the MoU, the companies will explore the export possibility of the products to reach global demands.

In May 2022, Bharat Dynamics inked another contract with the Ministry of Defence worth Rs 29.7 billion for the supply of Astra MK-I BVR air-to-air missile and associated equipment for the Indian Air Force and the Indian Navy.

Now that we’ve looked at the gainers, let’s glance through the top losers which have erased the most value.

Barring some stocks, 2022 has been a year of overall market consolidation. Here are some of the worst-performing stocks of 2022…

Debt-laden Future Group companies have been under pressure for quite some time now.

The group’s plan to sell its retail, wholesale, logistics and warehousing assets on a slump sale basis to Reliance Industries received a setback in April.

The Rs 247.1 bn deal failed to secure the necessary 75% approval from secured creditors.

A group of lenders that accounted for most of the loans to Future Group rejected the proposal to sell the assets to Reliance Retail Ventures, due to lower valuations.

The lenders said that not only did Reliance lower its offer from the agreed price but it also imposed a slew of conditions that must be met for the deal to proceed.

The deal falling apart has dragged the share price of certain future group companies. Have a look at the table below.

The healthcare stock soared high during the Covid-19 pandemic but has taken a turn for the worse as the pandemic ebbed.

The stock is down 63% in 2022 so far and fell over 15% in the past month alone. The company posted a weak set of numbers for the December quarter.

According to the company, the performance was muted due to subdued regulated market demand and higher costs driven by volatile material pricing environment and increased logistics costs.

The stock price took another dive when the company announced the resignation of the managing director and CEO, Rajender Rao Juvvadi.

The stock corrected over 21% in two trading sessions following the news.

Separately, the company’s board also decided not to go ahead with the proposed merger with Aurore, to enable the company’s focus on its core competency and organic growth.

The merger was designed to further accelerate Solara’s Global reach by combining the two companies.

When the transaction was announced, Solara and Aurore delivered their highest ever EBITDA performance but the momentum was lost due to weak demand for covid products. 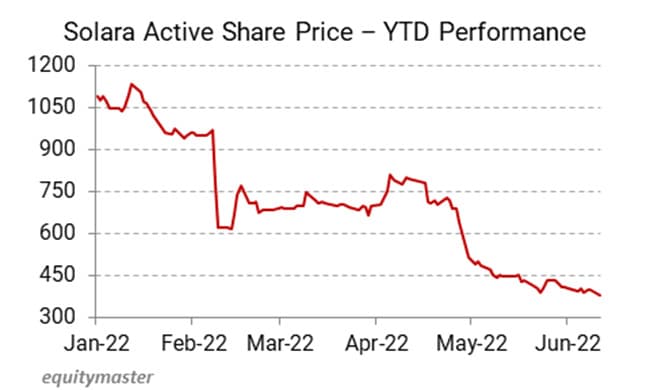 The small-cap IT company has fallen in 2022 along with other IT companies. Xelpmoc is down over 58% this year.

IT stocks have been weak this year mainly due to weak earnings and higher expenses in terms of hiring and retaining employees.

Xelpmoc shares took a hit, as the company yet again posted negative bottomline for the December 2022 and March 2022 quarters. The operating and profit margins have also declined during the period under review.

Adding fuel to the fire, the promoters of the company have also been decreasing their stake in the company for last three quarters.

Last on the list is Himatsingka Seide. The textile stock has declined over 58% in 2022 and has fallen 10% in the past month alone.

Himatsingka Seide is engaged in the business of manufacturing natural silk and silk blended fabrics.

The company has posted weak financials for the past five years. Take a look at some of the key financial ratios.

This does not paint a healthy picture for the investor, resulting in share price consolidation.

Well, that depends on whether you’re a trader or an investor.

Traders will find it useful to know which stocks are defying the trend in the market. They might look to trade these stocks in the F&O segment after careful analysis.

However, investors should not be too concerned about shout term price movements. It always feels good when the stock you have bought does well when the market declines. But to a long-term investor, it’s the fundamentals that should matter.

Also, while considering any investment, doing due diligence goes without saying. The recent performance of the stock can only offer limited comfort when making a buying decision.

(Disclaimer: This article is for information purposes only. It is not a stock recommendation and should not be treated as such.)

This article is syndicated from Equitymaster.com