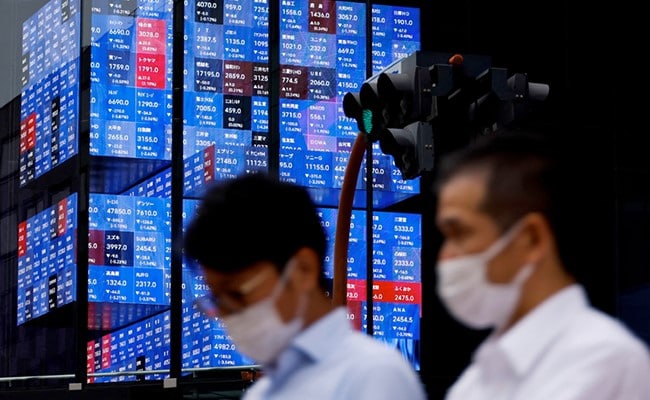 Asian shares were unable to sustain a rare rally on Monday as Wall Street futures shed early gains amid worries the U.S. Federal Reserve would this week underline its commitment to fighting inflation with whatever rate hikes were needed.

The euro also softened slightly after French President Emmanuel Macron lost control of the National Assembly in legislative elections on Sunday, a major setback that could throw the country into political paralysis.

The S&P 500 fell by almost 6% last week to trade 24% below its January high. Analysts at BofA noted this was the 20th bear market in the past 140 years and the average peak to trough bear decline was 37.3%.

Investors will be hoping it does not match the average duration of 289 days, given it would not end until October 2022.

Looming over markets are concerns major central banks will have to tighten so aggressively to contain runaway inflation that they will tip the world into recession.

“Market volatility has remained elevated with the VIX index seeing the highest weekly close since late April, a theme that goes beyond equities with a spike in FX and rates volatility alongside wider credit spreads,” said Rodrigo Catril, a strategist at NAB.

“At this stage it is hard to see a turn in fortunes until we see evidence of a material ease in inflationary pressures.”

Relief seems unlikely this week with U.K. inflation figures expected to show another alarmingly high reading that could push the Bank of England into hiking at a faster pace.

A whole chorus line of central bankers are also on the speaking calendar this week, led by a likely hawkish testimony from Federal Reserve Chair Jerome Powell’s to the House on Wednesday and Thursday.

The Fed last week vowed its commitment to containing inflation was “unconditional”, while Fed Governor Christopher Waller on Saturday said he would support another hike of 75 basis points in July.

“With rapidly slowing growth momentum and a Fed committed to restoring price stability, we believe a mild recession starting in Q4 is now more likely than not,” warned analysts at Nomura.

“Financial conditions are likely to tighten further, consumers are experiencing a significant negative sentiment shock, energy and food supply disruptions have worsened and the outlook for foreign growth has deteriorated.”

The euro was a fraction lower after the French election at $1.0490, still uncomfortably close to last week’s trough at $1.0357.

The yen remained under broad pressure as the Bank of Japan stuck doggedly to its super-easy policies even as all its developed world peers took steps to tighten. The dollar was steady 135.00 yen, having reached its highest since 1998 last week.

Bitcoin slipped 3% to $19,897, having bounced sharply over the weekend amid talk of a single large buyer.

The strength in the dollar has kept gold in a tight sideways pattern for the past month or so and it was last stuck at $1,836 an ounce.

Oil prices edged down again after a sharp retreat late last week amid concerns high energy prices were adding to risks of a global recession which would ultimately curb demand.

How A China Smartphone Maker Grabbed No. 3 Position In India In 4 Years