Basket Ball-Sized Coconut Drops On Woman, She Falls Off Scooter 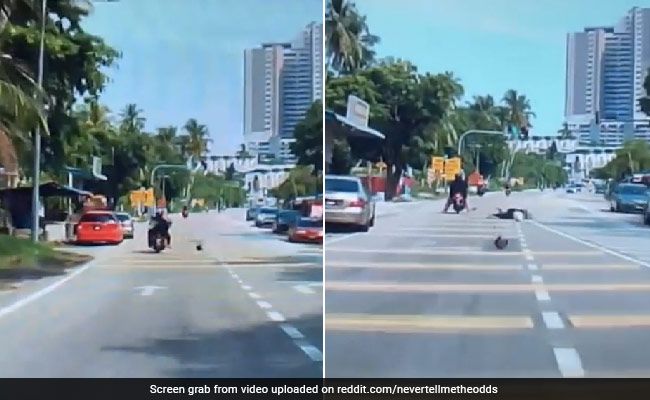 The woman fell on the road after coconut hit her head.

A woman riding pillion on a two-wheeler narrowly escaped death when a coconut fell on her in a small town in Malaysia. The incident took place in Jalan Teluk Kumbar on Sunday and its video is now going viral. The woman was wearing a helmet, which saved her life.

The 28-second video, posted on Reddit, was caught on the dashcam of a car that was right behind the two-wheeler. According to local media reports, the scooter was heading towards George Town from Teluk Kumbar.

The video shows the pillion rider falling from the vehicle and rolling on the road before coming to a stop after the basket ball-sized coconut hit her head. The impact also threw away the helmet to the ground.

The car behind the two-wheeler immediately comes to a halt, as seen in the video. The other woman, who was driving the scooter, promptly stops the vehicle and parks it by the side of the road, before rushing to help her injured friend, the video further shows.

Several locals and passers-by are also seen quickly springing to action, alerting other motorists to slow their vehicles.

The woman was rushed to a local hospital where she is recuperating, according to local media report.

Azrul Mahathir Aziz, a local politician, posted about the incident on Facebook and identified the woman as Puan Anita from Taman Emas, which is in his constituency.

Mr Aziz further said that he rushed to the site of the accident and requested relevant agencies to take immediate action.

In a separate Facebook post, he also informed that the coconut trees, which are dangerously bent towards the road, will be cut by authorities.

Mr Aziz said he had contacted the children of the victim, who is with her at the Penang Hospital.