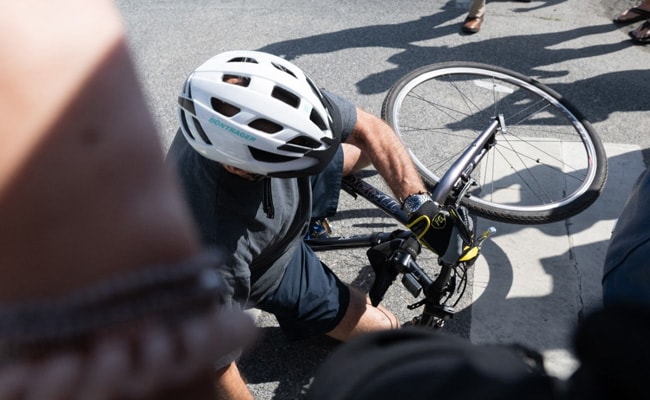 Former US President Donald Trump took a jibe at incumbent Joe Biden who recently fell off his bicycle near his vacation home in the US state of Delaware.

“I hope [Biden] has recovered because as you know, he fell off his bicycle. No, I’m serious. I hope he’s okay. Fell off a bicycle. I make this pledge to you today – I will never, ever ride a bicycle,” Trump said during one of his rallies on the America Freedom Tour.

He was quoted as saying by The Hill.

This dig comes as Trump has repeatedly teased a US presidential bid in 2024 since leaving the White House last year. Recently, in an interview, he said that he was “very close to making a decision” on another campaign.

Earlier on Saturday, Biden took a tumble off his bike as he took a ride near his vacation home in Delaware. His security crowded the 79-year-old US President and helped him get upright.

“I’m good,” Biden said, telling pool reporters that he had had trouble taking his biking shoes out of the pedals.

“As the President said, his foot got caught on the pedal while dismounting and he is fine. No medical attention is needed. The President looks forward to spending the rest of the day with his family,” a White House official said.

Last month, Biden nearly fell walking up the stairs of Air Force One.

A similar incident took place last year in Atlanta when Biden stumbled on the plane’s steps three times. He then blamed the widely seen spills on gusts of wind.

Biden was in Delaware with his wife to celebrate their wedding anniversary. The US President is spending the weekend in Rehoboth Beach.

In recent days, the former US President Trump increased attacks on the House select committee investigating the January 6 riots at the Capitol, calling it a “theatrical production of partisan political fiction.”

Dismissing the hearings as a “witch hunt”, Trump has increased focus on the hearings, highlighting how the potential threat the committee’s findings could pose to a re-election bid in 2024.

According to The Hill, even Biden, who has seen his approval rating plummet to record lows in recent months, is shown to be competitive when pitted against Trump in a re-rematch.

Brittney Griner’s anniversary call with wife never happens after snafu: ‘I have zero trust in our government’

Brittney Griner's anniversary call with wife never happens after snafu: 'I have zero trust in our government'