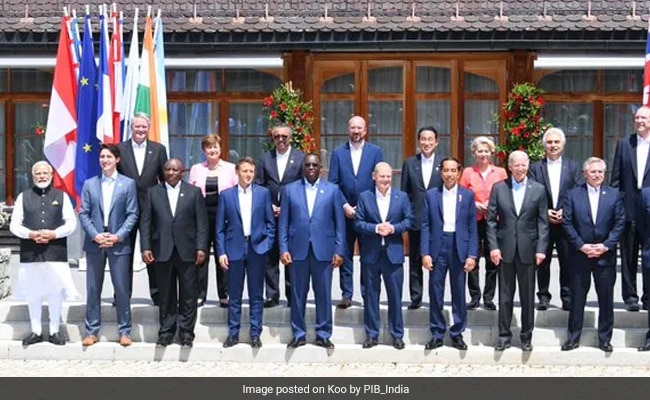 The G7 leaders signalled that they would seek to extricate themselves from economic dependence on China.

G7 leaders on Tuesday condemned China’s “non-transparent and market-distorting” international trade practices in an end-of-summit statement billed as “unprecedented” by the United States.

The statement, which also pledged to reduce “strategic dependencies” on China, came hours before the leaders join a larger group of their counterparts at a NATO summit in Madrid.

There, the 30-member alliance was also poised to toughen its stance against Beijing in an update of its “strategic concept”.

The United States has long cast a wary eye at China over its trade practices, which Washington believes are designed to accord an unfair advantage to Chinese companies over foreign firms.

Russia’s invasion of Ukraine and Beijing’s refusal to distance itself from Vladimir Putin has prompted other countries, including export giant Germany, to also reconsider their economic reliance on the Asian giant.

Beijing’s increasingly strident claims over much of the South China Sea has also sparked alarm over its military ambitions.

In their closing statement following a three-day summit in the Bavarian Alps, the G7 leaders signalled that they would seek to extricate themselves from economic dependence on China.

They vowed to “foster diversification and resilience to economic coercion, and to reduce strategic dependencies”.

A US official called the collective statement “unprecedented in the context of the G7” in acknowledging “the harms caused by China’s non-transparent, market distorting, industrial directives”.

They stressed that the situation in Tibet, and in Xinjiang, where there is “forced labour”, “is of major concern to us”.

The statement also urged China to “honour its commitments” under the Sino-British Joint Declaration, in which Beijing agreed Hong Kong could keep some freedoms and autonomy for 50 years under a “One Country, Two Systems” model.

It pressed Beijing to get Russia to withdraw from Ukraine.

German Chancellor and summit host Olaf Scholz underlined the “ambivalence” in the West’s relationship with China.

But he said in an interview with Welt daily it was now “very clear that we need to diversify our supply chains and exports”.

That means also “having an eye on the entire Asian zone, because many countries have risen, not just China”.

After several years of detente and cooperation as China caught up economically with the West, Beijing has since taken a more assertive tone on the world stage.

Western allies acknowledge that the world’s biggest challenges, including climate change, cannot be solved without Beijing’s cooperation, but have become more cautious about China’s actions and aims.

The export powerhouse has over recent years offered billions in investments and loans to build roads, rail and bridges in poorer countries around the world.

While greeted enthusiastically in the beginning, some receiving countries have later found themselves mired in debt.

Scholz recently warned that China’s years-long lending spree in poorer countries, particularly in Africa, poses a “serious danger” that could plunge the world into the next financial crisis.

Critics have also accused Beijing of seeking to buy influence in the south.

To offer an alternative to the world’s poorest, the G7 on Sunday pledged $600 billion for global infrastructure programmes.

European Commission President Ursula von der Leyen said the huge programme showed partners in the developing world “that they have a choice”.

Beyond economic aid, Western allies are also poised for the first time to pivot their military strategy to address the challenges posed by China as they gather in Madrid for a NATO summit.

The update of the “strategic concept” is the alliance’s first in a decade.