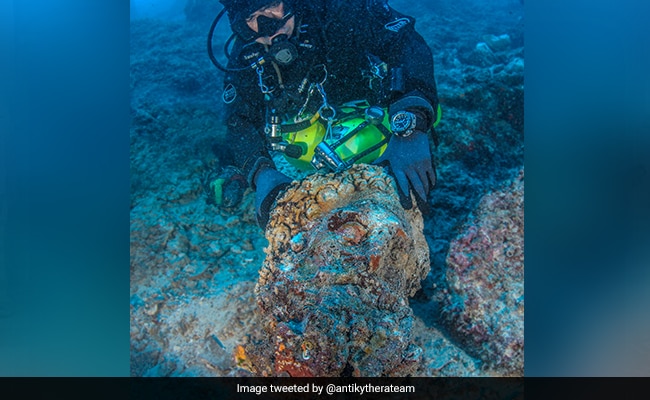 “There is no doubt it is Hercules,” says Professor Lorenz Baumer.

A Roman-era cargo ship, discovered off the Greek island of Antikythera more than 120 years ago and regarded as the world’s richest ancient shipwreck, has yielded yet more treasures in the most recent explorations of it. Underwater archaeologists discovered the head of a 2,000-year-old statue of Hercules, as well as other artefacts like human teeth.

According to The Guardian, Professor Lorenz Baumer, the classical archaeologist who is overseeing the underwater mission with the University of Geneva, said, “In 1900, [sponge divers] pulled out the statue of Hercules [from the sea] and now in all probably we’ve found its head.”

Mr Baumer added, “It’s a most impressive marble piece.” He further went on to describe the characteristics of the statue that bore all the hallmarks of one of the great heroic figures of Greek and Roman mythology. “It is twice lifesize, has a big beard, a very particular face and short hair. There is no doubt it is Hercules,” Mr Baumer stated, as per the outlet.

The discovery of the sculpture, along with the plinth of another marble statue, human teeth and parts of the ship’s equipment, had been made possible by the removal of three boulders that had partially covered the wreck at the bottom of the sea bed. For nearly three weeks the research team of marine archaeologists and specially trained divers had access to an area never previously explored.

The Guardian reported that two teeth were embedded in encrusted marine deposits that had occurred on the shipwreck. Now, researchers believe that the genetic and isotopic analysis of the remains could prove groundbreaking in shedding light on the people who sailed the ship.

Several expeditions had previously also explored the wreck. Most famous among its cargo of giant marble and bronze statues, ceramics and glassware was the Antikythera Mechanism – a device used to map the motions of the sun, moon and planets which has been described by scientists as the world’s first analogue computer.

According to Newsweek, the latest mission was the second in a five-year research program by Greece’s Ephorate of Marine Antiquities, which runs until 2025.