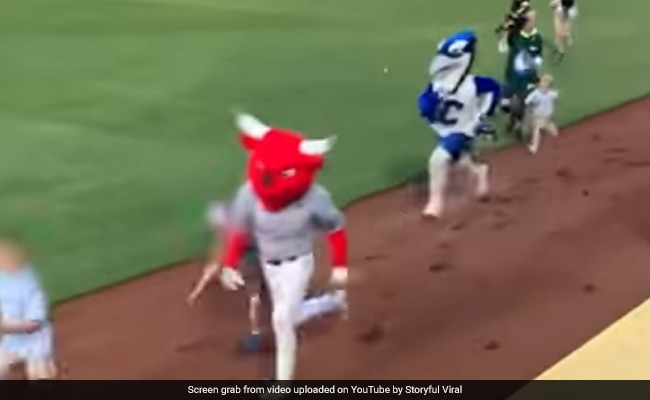 After the incident, the bull mascot of the University of Nebraska Omaha Mavericks, didn’t slow down.

A bullheaded mascot knocked over a child during a race at the NCAA Men’s College World Series – an annual baseball tournament – in Omaha, Nebraska. The incident took place between innings of Arkansas-Ole Miss (University of Mississippi) game on June 20.

Video recorded by Travis Bailey shows children leading in a race against a variety of mascots along the edge of the baseball diamond at Charles Schwab Field.

“As they were coming around, a kid saw the mascot coming and tried to get in his way to slow him down,” Mr Bailey told Storyful.

But Durango, the red bull mascot of the University of Nebraska Omaha Mavericks, didn’t slow down. Instead, his unbudging stride bounced the child off him, and onto the field.

“After the kid got smashed, the Creighton Bluejay hurdled the kid instead of stopping to help,” Mr Bailey added.

The video further showed staff members checking in on the child, who slowly got up and continued running.

According to the mascot’s LinkedIn page, Durango represents the qualities of the University of Nebraska at Omaha and its students.

“A maverick is defined as an individual thinker, someone who does not follow the social norms but helps advance them. I symbolize individualism – I am not your traditional mascot,” the description further said.

The tournament, which started on June 16, will go on till June 27. In a release, the NCAA said that four teams are left in the World Series.

3 Indian Companies Which Have Announced Big Dividend Payouts In 2022

3 Indian Companies Which Have Announced Big Dividend Payouts In 2022