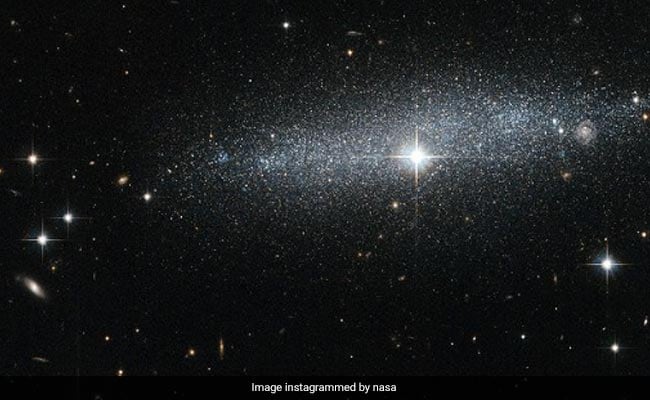 A sparkling galaxy that is light-years away, taken by the Hubble Space Telescope.

The National Aeronautics and Space Administration never fails to amaze with the photographs it shares on social media platforms. The pictures captured by different telescopes are often shared by the American space agency on Twitter and Instagram.

A recent post shared by the National Aeronautics and Space Administration, or NASA, on Instagram shows a picture of a sparkling galaxy, light-years away, taken by the Hubble Space Telescope.

“A little glitter goes a long way,” reads the caption of the post.

“Millions of light-years, actually! In the middle of this picture is a sparkling galaxy, crisply captured by the NASA Hubble Space Telescope. You might notice, however, that there are quite a few stars that look much brighter than the stars contained within the galaxy. For example, there’s a shining star at the center-actually, it’s a part of our own galaxy, the Milky Way. The star looks more luminous because it’s much closer to us,” the post by NASA said.

“While it looks like there are countless stars here, galaxies are mostly empty space. If, like here, they aren’t too dusty, we can see overlapping galaxies. In the top right corner is an elliptical galaxy. There’s also a spiral galaxy peeking through at the right-hand edge of the picture,” the caption said.

A stunning video of Jupiter was released by the space agency a few weeks ago, which was captured by the spacecraft Juno. The video gave a glimpse of Jupiter, a gas giant.

NASA’s Juno took the footage on April 9 during its close fly-by of Jupiter – 3,200 km from the gas giant.

This was Juno’s 41st fly-by of Jupiter, with the spacecraft travelling at a relative speed of 2,10,000 kmph, seven times faster than the International Space Station, or ISS.