Rare Megamouth Shark Washes Up On Beach In The Philippines 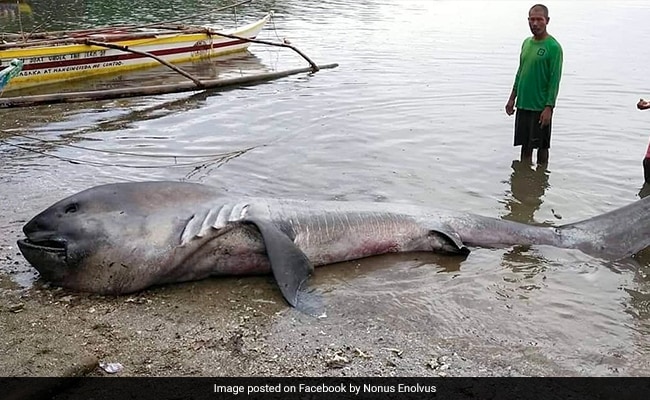 The megamouth sharks can live as deep as 15,000 feet below the surface of the ocean.

An extremely rare megamouth shark washed ashore near a Philippines coastal village. It was found by the fisherfolk in the remote area of Gubat, in Sorsogon and the photos are gaining traction on social media.

Megamouth shark is very rarely sighted by humans, and can live up to 100 years.

The photo of the deepwater fish was first posted on Facebook by Bureau of Fisheries and Aquatic Resources (BFAR) spokesperson Nonie Enolva on June 11 from where it was picked up by other publications and social media platforms.

Newsweek quoted Ms Enolva as saying that the shark could have become tangled in a fishing net.

The megamouth sharks can live as deep as 15,000 feet below the surface of the ocean and spend most of their time in the dark.

This is one of the largest shark species, measuring up to 16 feet in length and weight about 2,700 pounds. The one found dead near the Philippines village measured 15 feet.

According to Forbes, the megamouth shark was first discovered in 1976 by a US Navy research vehicle operating in Hawaiian waters.

So far, only 269 confirmed occurrences of megamouth sharks around the world, as per Florida Museum. It further said that this species is frequently caught as bycatch in commercial drift nets near Taiwan.

The megamouth shark has a rounded snout and a large mouth on its bulbous head and its body tapers back to a moderate caudal (tail) fin with a heavier top lobe.

The colour of their skin is dark gray-brown on top and light gray to white below.

The megamouth shark is believed to be diurnal, following swarms of krill from the surface of the open ocean during the day, and diving deep at night.