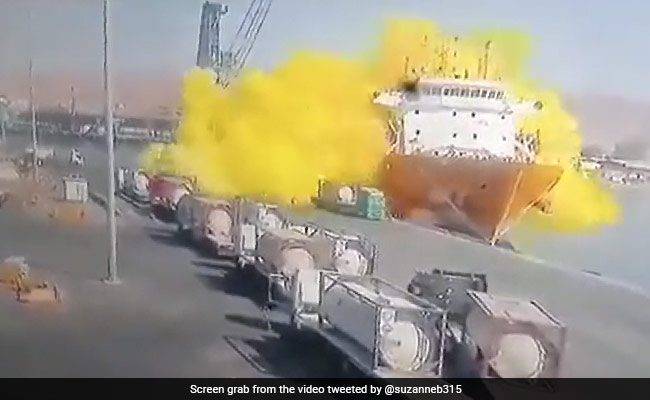 An iron rope carrying the container broke while it was being loaded onto vessel.

A crane loading chlorine tanks onto a ship in Jordan’s port of Aqaba on Monday dropped one of them, causing a huge explosion of toxic yellow smoke that reportedly killed 12 people and injured more than 250. According to the AFP, authorities have said that a chemical storage container fell while being transported as a result of a crane malfunction.

CCTV footage of the incident showed the container being hoisted into the air and then suddenly dropping onto a ship and exploding. A large cloud of bright yellow gas is seen spreading across the ground. Dockworkers are also seen scrambling to escape the toxic smoke.

“At exactly 15:15 this afternoon, a chlorine gas leak occurred in the port of Aqaba as a result of the fall and explosion of a tank containing this substance,” the government’s crisis cell said in a statement, as per AFP.

At least 10 people have died and more than 250 injured after a toxic gas leak at Aqaba Port in Jordan. pic.twitter.com/kjTDaPkelw

Citing state media, the BBC reported that 199 of the injured were being treated at hospitals for chemical exposure. Some were in critical condition.

Following the incident, the authorities advised residents of Aqaba city, which is 16km north of the port, to stay inside and close windows and doors. As a precaution, Aqaba’s southern beach was also evacuated. Moreover, the Civil Defence Department sent specialist teams to the port to deal with the leak and clean-up operation.

Separately, the deputy director of Aqaba’s port told AlMamlaka TV that an “iron rope” carrying the container “broke” while it was being loaded onto a vessel. He informed that the container was filled with between 25 and 30 tonnes of chlorine and was being exported to Djibouti.

Chlorine is a chemical used in industry and in household cleaning products. It is a yellow-green gas at normal temperature and pressure. When chlorine is inhaled, swallowed or comes into contact with skin, it reacts with water to produce acids that damage cells in the body. Inhaling high levels of the gas causes fluid to build up in the lungs – a life-threatening condition known as pulmonary oedema.