Train Smashes Into SUV At Railroad Crossing In Canada 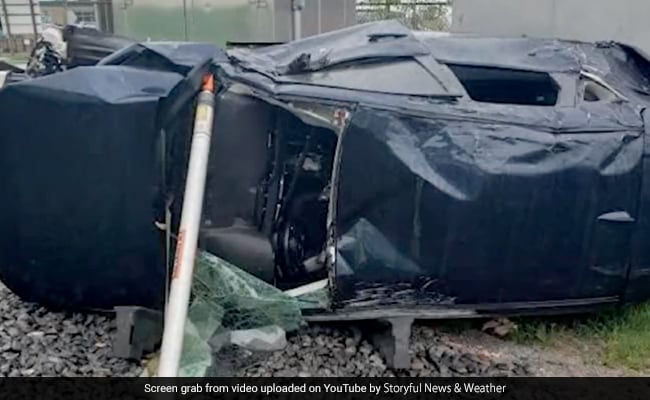 The driver will be facing charges for reckless actions.

A commuter train in Toronto, Canada, recently crashed into a car that drove around the barrier and stopped on the tracks in mid-May. Metrolinx, a government agency in Ontario that manages roads and public transport, released a video a month after the incident “to raise awareness about safety at level crossings”.

The clip made available by Storyful shows the driver approaching the railroad crossing as the barrier lowers to signify a train is coming. The motorists then slowly drive around the barrier onto the tracks, and seconds later, the train crashes into the SUV. At the end of the video, a picture of the damaged vehicle is also shown.

Metrolinx informed the driver of the SUV left the scene without any serious injuries. He will be facing charges for reckless actions.

The government agency further added that every year 100 Canadians are seriously injured or killed at level crossings. “Everyone needs to be alert at level crossings and remember that trains move quickly and can appear at any time.” said Martin Gallagher, chief safety officer at Metrolinx.

Meanwhile, in another shocking incident, a high-speed police pursuit ended in a crash, in which the suspect’s car flipped four times before landing on its roof. A video shared on social media showed a black car at the corner of a security camera’s frame, speeding towards the neighbourhood.

The driver loses control for a moment and that is when the vehicle overturns while trying to avoid a head-on collision with an oncoming vehicle. The video showed the black sedan flipping and dragging along the road before coming to a stop right in front of the house where the security camera was installed. The incident left internet users in shock.

Web Developer vs Web Designer: Which One Need to Hire For Your Project?