A network of Twitter accounts pushed messages to boost the share price of a biotech company as it sought approval to run a clinical trial of its Covid-19 vaccine, according to research provided to Bloomberg News.

The tweets promoted stock for Ocugen Inc., which is based in Malvern, Pennsylvania, at rates well above market value, according to research by Alethea Group, a startup that tracks disinformation. The company’s share price nearly doubled in a little more than a week.

“Individuals sharing information about companies online is not new, but the use of social media manipulation tactics for financial gain is something we’ve long anticipated and believe will grow,” Kaplan said. “Given the volatility in the public markets, there’s increased incentive for these types of attacks, which ultimately hurts corporations, investors and stockholders.”

In October, Ocugen asked the US Food and Drug Administration for permission to a clinical trial for a Covid-19 vaccine. The vaccine, known as Covaxin, was developed by India’s Bharat Biotech International Ltd. and doesn’t use the messenger RNA technology that Moderna Inc. and Pfizer Inc. relied on for their vaccines. 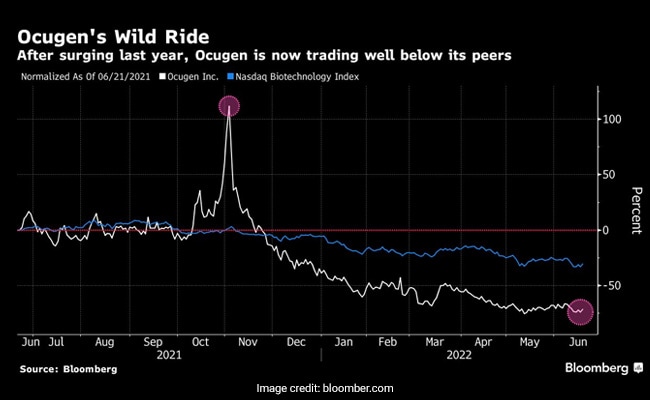 After surging last year, Ocugen is now trading well below its peers

During that period, more than 100 Twitter accounts heavily promoted Ocugen stock, urging followers to invest, claiming that the value of the stock would soon exceed $200 per share, according to screenshots of the tweets, many of which have since been deleted. “$OCGN buy rumor sell news MFS #OCGN #Bullish,” stated one tweet replicated by a handful of Twitter accounts that used stock image photography, according to a Bloomberg News analysis.

Researchers said the accounts acted like bots and that they published more than 15,000 tweets, sometimes minutes apart. The account names included @SmileAI10 and @moviecriticbot, and they often used the hashtags #OCGN and #Bullish. Alethea researchers analyzed tweets from 105 Twitter accounts during a two-week period last year. In the two months immediately before Ocugen filed for FDA approval, the same accounts sent a total of some 3,400 tweets, according to Alethea’s findings.

The amount of bot activity on the social media service has became a point of contention in Elon Musk’s effort to buy Twitter Inc., as he threatened to walk away unless the social media company could prove bots made up fewer than 5% of users.

It remains unclear who was operating the Twitter accounts that participated in touting Ocugen stock, and Alethea researchers didn’t definitively determine that the motive was to boost share value.

Username and password credentials of some of the Twitter accounts that promoted Ocugen were available in publicly accessible databases on the code-sharing site GitHub. That the accounts were accessible to anyone with knowledge of the GitHub page suggested to researchers that anyone could have been in control of the suspicious Twitter accounts, as the username and password data was public.

The reach of the network was relatively limited, and it apparently failed to attract the kind of attention that would be desirable for anyone trying to influence public opinion on a large scale, according to an analysis by C. Shawn Eib, a senior analyst at Alethea Group who discovered the activity.

Much of the activity appears to have been coordinated through a Twitter profile known as @RecvProfit, an anonymous user that uses a stock image and tweets frequently about cryptocurrencies, non-fungible tokens and digital marketing techniques, according to Eib. The account’s followers would replicate @RecvProfit tweets within minutes, sending their own messages and promoting @RecvProfit in the form of retweets.

The account could have been the creation of an individual who invested in cheap stock, then used inauthentic social media activity to try to inflate the value of the share price, researchers said.

While the specific motive of the Ocugen tweets remains unclear, the case appears to be another example of how social media is a new tool being used to carry out traditional investment schemes, said Christopher Hetner, former senior cybersecurity adviser to the chair of the US Securities and Exchange Commission who now works as an adviser for the National Association of Corporate Directors.

Last month, the SEC warned investors to beware of “pump-and-dump” efforts in which promoters pump up the stock price of a company by spreading positive but often false rumors. They then dump the shares before the hype ends.

In April, a Florida day trader pleaded guilty to circulating false rumors in financial chat rooms and news services about public companies in order to drive up the price and make more than $130,000 in ill-gotten gains. The SEC in 2019 charged nine defendants in connection with a plot to hack the SEC’s EDGAR database in order to steal nonpublic data that allegedly helped them make more than $4 million in profits.