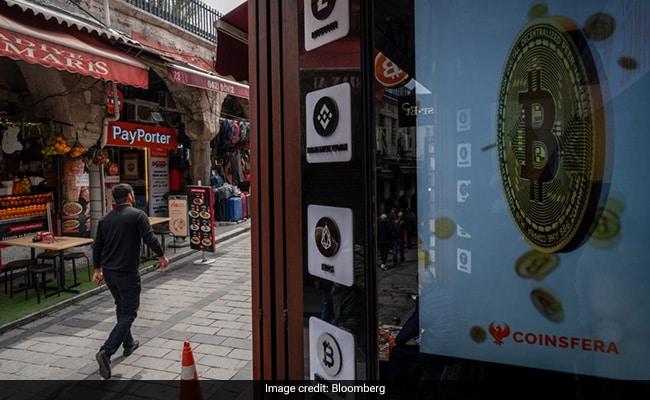 Cryptos excruciating week has traders bracing for next crisis

It was one of the most dramatic weeks in the short history of the cryptocurrency market, bookended by the type of announcements investors fear the most from a counterparty: We’re sorry, but we just can’t return your money right now.

In between, a nascent technocratic industry with grand ambitions to reinvent the financial system was rocked repeatedly by echoes of past crises in the old system.

It was a week of margin calls, forced selling and important collateral being exposed as way too illiquid in a time of crisis. There were rumblings of hedge-fund blowups, tales of opportunistic predatory trading, job cuts and loud denials of problems from key players proven wrong almost immediately.

Amid it all, the myth was shattered once and for all that this new crypto financial system was somehow immune to — or even able to benefit from — the economic fundamentals currently punishing the old system.

It all started late Sunday, when a sort of crypto shadow bank called Celsius Network suspended withdrawals from depositors who had been enticed by sky-high interest rates that, in retrospect, were likely too good to be true.

By the end of the week, on the other side of the world in Hong Kong, the digital-asset lender Babel Finance also froze withdrawals.

.@CelsiusNetwork is pausing all withdrawals, Swap, and transfers between accounts. Acting in the interest of our community is our top priority. Our operations continue and we will continue to share information with the community. More here: https://t.co/CvjORUICs2

We’re working on it, both firms told customers, and no doubt they are. Yet speculation is growing that Celsius Network, at least, is drowning in what research firm Kaiko called a “Lehman-esque” position.

Like Lehman Brothers did almost 14 years ago, Celsius’s woes showed how interconnected big players in this financial system are and how fast contagion can spread, making this week’s drama the sequel to last week’s and the prequel to next week’s.

Many analysts have pointed to problems that Celsius is having with an Ethereum-linked token called staked ETH, or stETH — a coin designed to be a tradable proxy for Ether that’s widely used in decentralized finance.

While every stETH is meant to be redeemable for one Ether after long-awaited upgrades of the Ethereum blockchain take effect, recent market turmoil has caused its market value to fall below that level.

Research firm Nansen has also identified Celsius as one of the parties involved when the UST stablecoin lost its peg to the dollar in May.

The episode with that token, which was driven largely by algorithms, crypto animal spirits and untenable yields of 19.5% for depositors in the Anchor Protocol, triggered the loss of tens of billions dollars in the spectacular implosion of the Terra blockchain.

Nansen’s analysis confirmed that Terra’s Anchor program had been an important source of yield for Celsius, according to commentary from crypto exchange Coinbase.

“In our view, this likely begged the question of how Celsius could fulfill its obligations without that 19.5% yield,” wrote the institutional team at Coinbase. That firm, by the way, said this week it will lay off 18% of its previously fast-growing workforce, joining other pink-slip-issuing crypto startups such as Gemini and BlockFi that are struggling amid a relentless plunge in asset prices that’s been dubbed “crypto winter.”

The drama ramped up on Wednesday with an alarming tweet that seemed to confirm speculation that had been swirling around one of the most influential hedge funds in crypto, Three Arrows Capital.

“We are in the process of communicating with relevant parties and fully committed to working this out,” one of the firm’s co-founders wrote, without revealing any details about what exactly the “this” was that it was working out.

By the end of the week, the multi-billion-dollar fund’s founders had explained to the Wall Street Journal that they were exploring options that include a rescue by another firm and an agreement with creditors that would buy them time to work out a plan.

Three Arrows, too, was a casualty of both the stETH woes and Terra’s collapse. The fund had bought about $200 million in the Luna currency used to back up the value of Terra’s UST stablecoin, according to the Journal. Luna, which sold for more than $119 in April, is now worth about $0.000059.

Just as Bear Stearns’s hedge funds were among the first to reveal problems from the subprime mortgage crisis, Three Arrows is likely not alone. The “cockroach theory” springs to mind: If you see one of those nasty bugs scurrying across the floor, chances are there are plenty more hiding behind the fridge or under the sink.

In fact, the hot trade in crypto now is no longer pumping coins “to the moon” with tweets full of rocket-ship emojis, but rather trying to find where those roaches are hiding and make a meal out of them.

Some crafty traders have dispatched bots to prowl blockchains in search of highly leveraged positions in danger of forced liquidation because the value of their collateral is no longer enough to back up their loans. If successful, they get a 10% to 15% cut of the collateral sale — incentives paid out by automated protocols that are meant to protect them from insolvency.

As the dust settled at the end of the week, the damage was startling. Bitcoin has notched 12 straight days of losses, its longest sustained slump, and it breached $20,000 early Saturday for the first time since 2020.

Flailing against a backdrop of monetary tightening, the world’s largest cryptocurrency is now down more than 70% from its highs in November when it was approaching $70,000. Ether dipped below $1,000, having sold for as much as $4,866 seven months ago.

What was once a more than $3 trillion industry is now valued at less than $1 trillion.

And despite the similarity of past crises in traditional finance, there is one big difference as the weekend approaches: Players in the old-fashioned markets at least get to turn their machines off on Saturday and Sunday to get some sleep and lick their wounds.

As a three-day holiday weekend approaches in the US, with forecasts for sunny skies in New York, those with heavy exposure to digital assets will remain glued to their screens, where crypto winter’s deadly blizzard shows little sign of letting up.

–With assistance from Olga Kharif, Emily Nicolle and Muyao Shen.

China Plans to Build Solar-Power Plant In Space By 2028