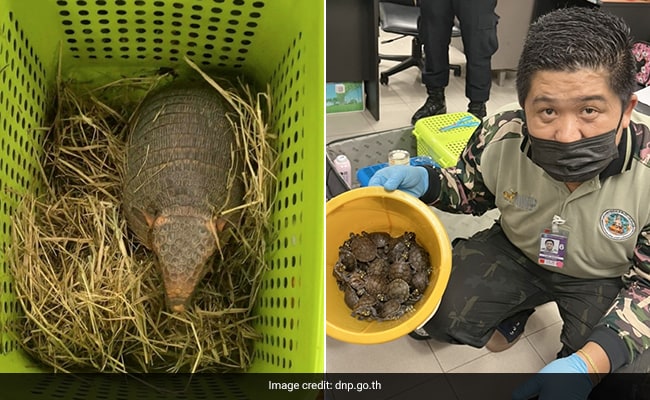 Luggage belonged to two Indian women who were due to board a flight to Chennai.

Thailand officials on Monday arrested two Indian women at Suvarnabhumi Airport in Bangkok for allegedly trying to smuggle 109 live animals in their luggage.

In a press release, Thailand’s Department of National Parks, Wildlife and Plant Conservation said that the animals were discovered in two suitcases following an X-ray inspection. They found two white porcupines, two armadillos, 35 turtles, 50 lizards and 20 snakes in the two pieces of luggage.

Thai authorities said the suitcases belonged to two Indian women – Nithya Raja and Zakia Sulthana Ebrahim – who were due to board a flight to Chennai. They have been arrested and charged with violating the Wildlife Conservation and Protection Act of 2019, the Animal Disease Act of 2015 and the Customs Act of 2017.

The officials did not reveal what the suspects were planning to do with the animals upon arriving at their destination, or what happened to the animals after they were rescued from the cramped suitcases.

According to CNN, animal trafficking via airports has long been an issue in the region. In 2019, a man arriving in Chennai from Bangkok was reportedly detained at the airport after customs officers found a month-old leopard cub in his luggage.

More recently, last month customs authorities at the Chennai International Airport thwarted two attempts to smuggle wild animals from Thailand in two days. According to PTI, the authorities intercepted a passenger, who arrived here from Bangkok, and recovered an albino porcupine and a white-lipped red chested tamarin (monkey) from his baggage.

A 2022 report by TRAFFIC, a wildlife trade monitoring agency, also said that over 70,000 native and exotic wild animals were discovered in 140 seizures at 18 Indian airports between 2011 and 2020.

Tesla Shuts An Office As Layoff Hits Autopilot Jobs, Even Hourly Ones

Knicks’ reported pursuit of Jalen Brunson faces skepticism: ‘I’m not sure that moves the needle’

Knicks' reported pursuit of Jalen Brunson faces skepticism: 'I’m not sure that moves the needle'