Rupee Falls To A New All-Time Low Of 78.17 Per Dollar; Fed In Focus 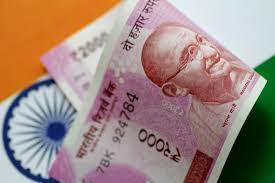 The rupee slipped provisionally to a new all-time low of 78.17 against the US dollar as investors remained wary of the US interest rate hike and the resultant market moves after.

Indeed, at the interbank foreign exchange market, the currency opened at 77.99 to a dollar and finally settled at its all-time low of 78.17, down 13 paise over its previous close of 78.04.

The dollar index, which gauges the greenback’s strength against a basket of six currencies, fell 0.64 per cent to 104.84.

While the dollar held near its overnight 20-year peak on Wednesday ahead of the outcome of the Fed policy meeting at which markets are pricing in a bigger-than-previous predicted 75 basis point interest rate hike, financial markets remained subdued.

But the Indian currency, weighed by persistent capital outflows, weak domestic equity markets, and higher energy prices, has hit record lows repeatedly in recent months after breaching 77 per dollar for the first time in March, a few days after Russia invaded Ukraine in late February.

This week, the rupee breached 78 for the first time ever and has traded in a narrow range since Monday.

Indeed, on Tuesday, the rupee surrendered early gains to end flat near its lifetime low closing of 78.04 per dollar.

In an extremely volatile session, Indian benchmark equity indexes closed in the red, see-sawing between losses and gains, marking the fourth straight session of losses for the stock markets’ key indices, as investors remained jittery ahead of the Fed’s policy meeting.

“The spot rupee hit an all-time low of 78.30 levels after the US CPI data soared to 8.60 per cent last week. The dollar will soar further and equity markets will come under pressure if the Fed takes an aggressive stance for future rate hikes even if it hikes rates by 75 bps today,” wrote the currency Desk of Emkay Global Financial Services on the Indian rupee performance, in a research note.